A memory of Babak zanjani s lawyer about biology system 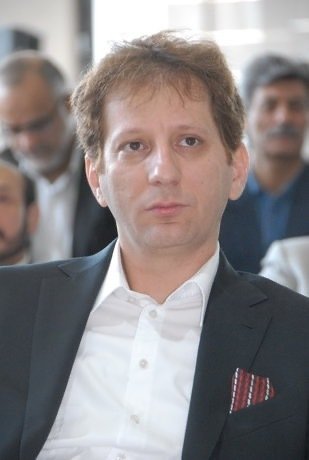 Babak Zanjani's lawyer mentioned a letter from his client, raising the issue of the possibility of a coronavirus biological warfare. According to the Nashan news website:   Rasoul Koohpayehzadeh wrote on his Instagram page: One of the serious hypotheses about the #Crona virus is its connection with the topic of #biological_war or "bio-terrorism". This means that the use of biological agents, including bacteria, viruses, fungi, and their products, is for hostile purposes to kill or disable humans. Answering the question of what is the origin of the new coronavirus is an important challenge for # Politicians, strategists and scientists have become part of public opinion. Some Chinese sources have described Corona as a biological warfare against the United States. In Iran, too, the competent #military and #political authorities have considered the hypothesis of biological warfare possible. Today, while I was tidying up my office, I re-read the letter of my client, Mr. #Babak_Zanjani, who wrote to the esteemed members of parliament on July 28, 2008. In part of this letter, which is related to this issue, it is stated: I went to China to buy a #natural drilling rig, and it was built by the Chinese Ministry of Defense, and I bought it from him. Today, we all see how useful it was to buy it six years ago. I visited China and saw that there was a simple bullet and ammunition and there was a biotechnology written next to it. I asked, "What does this word mean?" They said that in wars, we try to supply our enemy with ammunition for free and through groups such as friends, and as soon as the enemy soldiers touch and use this ammunition, the enemy soldiers will suffer from dehydration. And within 72 hours, they drink so much water or get thirsty that they disappear. Gentlemen, we live in a certain age and we are no longer able to fight the old way ...)) Biological warfare has a long history: During World War II, the Japanese military deployed a secret unit to research and develop microbial and chemical weapons called Unit 731, and at the same time used plague, cholera, and the Black Sea. Kazaz worked in biological warfare. This was not limited to Japan. Until the time of Nixon, the Americans had extensive research programs on biological warfare, and it was not until the early 1970s that US biological weapons stockpiles, including the Black Sea factor and the botulism toxin, were apparently destroyed. Britain also destroyed its biological weapons stockpile in the late 1960s. Footnote: The photo is from the client's visit to the China Military Industry Museum / Rokna "